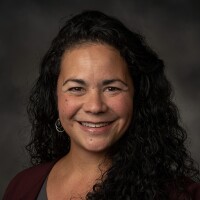 About:
Jamie Kalama Wood is the new Artistic Director of Living Legends, since August 2019. She comes to BYU from New York City, with an extensive background in performing and teaching the arts. She has performed on stages from New York to Las Vegas to Los Angeles. She has had roles as an actor, choreographer, soloist, and director in a variety of plays, musicals, commercials, and movies. She received her BFA from BYU in Music Dance Theatre in 2002, as well as her MFA in Musical Theatre from San Diego State University in 2006.

She has a unique heritage and love for world cultures and languages. Her father is Native Hawaiian (with some Japanese), and adopted Sioux (as are his children). Half her mother’s family hails originally from Mexico and the other half were LDS European pioneers.

“The Living Legends program is inspired by God. He cares for these students, our people, and the gospel message that this group can share in a way that is unique to them,” she said. “I am honored to be the new Artistic Director, and I hope that our Living Legends community knows how deeply they have affected me for good. I look forward to continuing the legacy of faith and power that drives this group forward.”